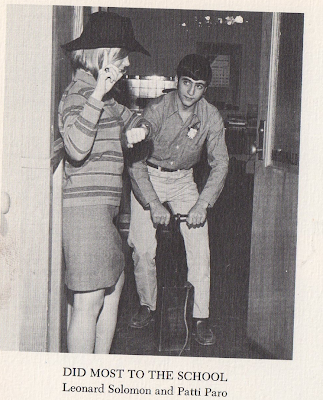 I got voted "Did Most To the School" by my high school senior class, with a corresponding picture in the yearbook. Toms River High School, class of '69.
This title was awarded to me in part because of a prank I had pulled, in which I had poured a quart of bubble bath into the courtyard fountain. I can't remember what gave me the idea to do this, but I bought a large bottle of bubble bath, poured it all into a wide-mouth jar (to ensure a quick deployment when the time came), and I carried the jar to school under my coat. Ducking out of lunch period early, I dashed to my locker to get the jar, then I contrived to walk briskly through the school's outdoor courtyard when no one else was there, dumping the scented goop into the gurgling basin of the fountain.
In a short time, the fountain was foaming up beautifully, and when classes changed after the next period, there was a minor riot outside as students frolicked and threw the billowing foam at each other. Due to these unplanned revels in the fine spring sunshine, many students ended up being late for next period's classes. Not me, though. Although I did manage to be "passing through" after the following period, and I noticed sadly that the foam seemed to be slumping a bit. Even so, the event created something of a buzz that day.
I had confided in some of my friends, and somehow word had spread to those who shouldn't have known. There was an Earth Science teacher, Mr. Smith, who had designed and built the fountain as a project with one of his classes, and it was he who had been lovingly maintaining the fountain. By some means on this day, Mr. Smith was alerted to the identity of the culprit in this prank. So during the last period of the day, Mr. Smith came storming into my class, in front of my astonished teacher and classmates, and hauled me down to the office, there to be judged and sentenced by our stern principal Mr. Donald.
My [fitting] punishment ended up being that I had to stay after school, and bail out the fountain with a paper cup.
This I did, under the baleful glare of Mr. Smith, carrying each cupful of suds a long walk out to the woods behind the school. Eventually, he relented and brought me buckets, mops, squeegees and a hose, to do a proper workmanlike job of the cleanup.

So when graduation time came on, I got the nod for the distinction of "did most to the school", according to the vote of the students. My lovely confederate in the yearbook photo had nothing to do with it. Her name was Patti, and she never gave me any specific reason for why she got voted to share our title, just that she was "sometimes rowdy". The set up in the photo was my idea; I made the "detonator" out of a shoebox, painted black. Not quite visible in the photo, the cable is going under the door, which bears the title, "John Donald, Principal". The old bulldog had a good sense of humor.

Thank you for your feedback--