Nobody could figure out where the sardines were coming from. They just kept appearing, as if an evil sorcerer were at work.
I was living in a house with a group of people, and we shared a communal pantry.  A lot of people came and went in that house, and it wasn't always clear who bought what.
One day, a great stash of sardines appeared in the food closet; there were about 20 cans of them. Nobody claimed responsibility for having bought them, and it was strange to see so many. I shrugged my shoulders along with everyone else.
So a couple of cans of the fish were sampled by several people. My friend Gene was the first. His nose wrinkled as he opened the can; he had a doubtful look on his face as he peered at the contents, but he cautiously tried a bite.
"These sardines are spoiled!" he pronounced, and he just left the remainder on the table for someone else to deal with.
Another person tried opening a new can, with much the same results. It soon became clear that none of the cans were any better; the fish was unpalatable. So the several opened cans got discarded; a stinking mess in the garbage can.
But in the pantry, there remained the large and mysterious stacks of unopened cans. About 20 of them sat around on the shelf for a few weeks. In spite of all the hungry mouths around that house, no one had anything further to do with those sardines.
The question eventually arose of what to do with the stacks of cans; nobody seemed to own them and certainly no one wanted them. I hate to see food get wasted, but we finally agreed that they would just have to be thrown out. This was done with little fanfare, and the mystery was soon forgotten.
But a few days later, what a commotion ensued when an even greater mountain of cans of the same dismal stuff appeared back in the cabinet! Everyone became greatly excited, and questions were flying back and forth.
"Who is bringing this stuff? Was it a friend of yours?"
"Is it a well-wisher, or an evil doer?"
"Can we just waste this food?"
"Even the cat won't eat it. I tried giving him some."
Without much more discussion, the pile of cans went out in the garbage a second time; this time I watched it go. I even saw when the garbage truck came and picked it up. As I watched the truck trundling off, I was grinning a secret smile that nobody noticed.
Several days after this, the mystery took on sinister proportions, when, incredibly, there was a third appearance of Manna from Hell in our food pantry; the biggest pile of cans so far: about 50 of them.
This was truly a profound study in human perplexity. The people were buzzing around like a hive of stirred-up bees.
"They're here again! This is incredibly strange!"
"This is freaking me out."
"We should start locking the front door."
The only problem this time was, as hard as I tried, I couldn't keep a straight face. I was cracking up, and suddenly all eyes were on me.
"Solomon, what do you know about this?!"
The high drama was completely spoiled; I had cracked under the pressure. Yes, I was the culprit;
I myself had been the unwilling recipient of a "gift" of several cases of very old sardines, which had been purchased by a traveling friend from a cannery several years previously. As the aging fish were becoming inedible, she had begged me to take it all, in hopes I would find some use for it.
Well, I had told her, I'd see what I could do.
Posted by Leonard Solomon 2 comments:

I've been observing the interesting behavior of my friend Allen, since we were small boys more than 60 years ago.
When we were 9 or 10 years old, our family was over at his family's house for dinner. Just as Allen was sitting down at the table, his younger brother Gene pulled his chair away, and Allen landed with a thump on the floor. He immediately flew into a shouting rage, sitting there on the linoleum, and his mother Charlotte drew him up onto his feet and gave Gene a sharp reprimand. Then she tried to soothe Allen. He was raving in anger, and nothing she could do would stop him, so she finally just grabbed a dishtowel, balled it up and stuffed it into his mouth. She pointed, "Go to your room!"
Without a pause, Allen continued to shout a fluent stream of invective at Gene and the world in general, but now his raving was in a strangely muffled howl through the dishrag. He toddled angrily but obediently out the door and down the hall, still flailing his arms and shouting through the gag. I thought it was very peculiar that it didn't occur to him to pull the rag out of his mouth.
The noise receded and abruptly stopped, with the slamming of his door. Charlotte shook her head with a helpless but amused grin, "That's my boy!"

On the kitchen wall, there was an office phone for the family's landscaping business. This phone was right next to the house phone, and the two looked identical, but their rings were different, to distinguish incoming calls. It occurred to my wicked mind one time to switch the receivers on their hooks. The switch wasn't obvious to look at, because the long cords hung down side by side. It seemed like a harmless prank, and then I forgot about it. A few days later I was there again, and I noticed that the receivers had been put right, so I switched them again.
A few minutes later, I was in the next room and I heard a phone ringing. Allen picked up, and I could hear him saying, "Hello… hello…?" Then, to my mortification, he became furious, and began swearing. "The #&*#-ing phone is &#%-ed up AGAIN!! NOTHING ever works around here!!" He slammed down the phone in a fury.
There was another person in the kitchen with Allen, and I could hear him trying to calm things down. "It's all right," the friend was saying. "The phone's not broken. See? Someone just switched the receivers here."
"Is that all it was?!" Allen shouted, cursing some more. "What kind of IDIOT would keep switching the receivers?! How can we run a *#%-ing business?!"
I slunk away, quite abashed. Of course, the business caller on the line would have been able to hear Allen cursing and shouting, because before Allen hung up again, the live receiver was sitting right there on the other phone's hook. I'll be tortured in hell for this stunt, or sooner, if Allen ever reads this.

Allen nourishes a myth about me, that I will eat anything. This is actually not true at all; I'm very particular about what I eat. The myth began because of an event one day when he came over with our friend Brady, to visit me in my workshop. Earlier that day, I had been eating a peanut butter sandwich, and I had put the half eaten sandwich on a plate near the table saw. Then I did some cutting with the saw, which of course throws up some dust.
When the guys came to my shop a little later, I spied the half-eaten sandwich on the plate. I picked it up, blew off the harmless sawdust and resumed eating it. Then I noticed Brady's reaction; he was green with disgust. His impression was that I had found some ancient moldy food in a corner and had begun carelessly devouring it, after having blown off the accumulated filth. The next day, Brady and Allen excitedly related this story to others, with some interesting embellishments, and thus the myth was born. Whenever Allen would introduce me to someone, he would be sure to tell them, "Solomon will eat anything!"  So I would encourage him, saying, it's no big deal.
Allen conceived of a dare; he thought he could stump me by proposing that I eat a tuna fish ice-cream sundae. If I ate it, he would pay for it. That didn't sound so bad to me; it was really no challenge to say, "Sure!"
Accordingly, we went out with some friends to an ice-cream parlor. When the waitress asked me for my order, I said, "I'll have a chocolate banana split, with a scoop of raspberry, a scoop of tuna fish salad, and a scoop of... um..."
The waitress interrupted me, before I could say, "vanilla"; she completely ruined my comic timing.
"Tuna fish?!" she frowned at me.
"Yes. Tuna fish, and... um... a scoop of vanilla."
"You're not serious!?"
"Yes, I am."
The waitress refused to go along with it, and after a little more discussion, she ended up bringing over the manager. The manager listened to the case, and finally responded by saying,
"If she brings it, you're going to have to eat it!"
"No he won't." Allen broke in, excitedly. "No he won't. He'll just have to pay for it."
So the manager gave the nod, and the waitress clamped her mouth tight, and wrote down the order, obscurely annoyed.
Everyone was eagerly watching as the tuna fish sundae was brought out and set before me. By this time, the entire restaurant was alerted, and watching me with rapt attention. I had made sure that I was good and hungry before we went out, and to tell the truth, the sundae didn't taste bad. I've tasted better combinations, but there was nothing disgusting about it, and I ate it up.
But somehow, to Allen this was all very remarkable, and he gladly paid for the sundae. This event gave them all something to talk about for a while, and the myth remained intact, with no very great effort on my part.

Allen's wife affectionately refers to him by the title I gave him once: the "Waddling Encyclopedia".
In some ways Allen is a lot smarter than me, but, as with all enduring friendships, there's a balance there. To my way of thinking, he can be really simple at times.
Posted by Leonard Solomon No comments: 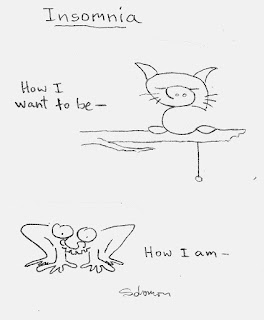