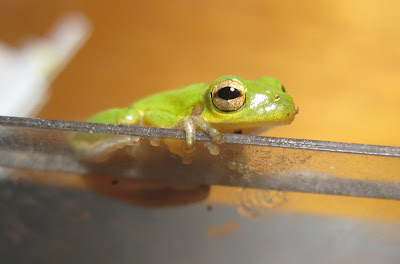 A leetle google-eyed pilgrim, an American Green Tree Frog,  jumped out of a bunch of kale I had put in the sink to prepare for dinner. The kale had been in our fridge for three days, and who knows how many days had passed since it was picked, stored and shipped from its origin in Florida, to arrive at our store here in the frozen Northeast?
The teeny green, golden-eyed hopper, as big as the end of my finger, looked healthy and was quite active, in spite of what must have been the awkward accommodations of his trip. I first saw him hopping along the counter behind the kitchen sink, and to begin with I was completely dumbfounded. It was a frigid snowy winter night, here in Massachusetts. Can frogs teleport? Then I remembered the kale I had just finished washing and chopping up.
I cornered the little critter and got him to climb onto my hand, with his little splayed sticky-toes, and he sat for a moment and then leaped onto my face. Why, I take that as friendly!
Since it was the middle of winter here, the usual flying and crawling critters, suitable for frog food, were all socked in until spring. I could leave a banana on the counter for two weeks at this season, and not a single fruit fly would appear. So where do I get anything to feed a tiny frog? He is counting on me now, even though that was surely not his original plan.
I dangled a scrap of chicken on a toothpick, and made it twitch enticingly like a bug within striking distance of my unexpected dinner guest. The frog continued to look stonily into space, meditating on who knows what profundities. He didn't seem much impressed by me, anyway.
I clapped the frog into a little glass terrarium I had, misted him with some water, and then thought about what to do. The first thing was, wash the kale again, anyway.

Eating kale:
Crunch crunch, crunch crunch, >squish<
"Say... I wonder what that was?"
No, thankfully, that didn't happen.

But how do I feed the frog? I remembered one cold winter a few years ago, I had been looking for something in the back shed and I turned over a wheelbarrow. Inside the wheelbarrow, I had found a number of adult mosquitoes clinging motionless to the underside of the metal. They winter over under such shelters, moving very slightly if they are touched.
Mosquitoes would be a perfect size for the frog, so I suited up now, and took a flashlight out there to see what I could find. It actually didn't take me long to find several mosquitoes in a similar situation as before, under a plastic bucket. I picked them off with a tweezers and plopped them into a plastic box and brought them inside. They were moving around within a few minutes of warming up, and before they started to fly, I dumped them into the frog's terrarium. One landed and was twitching right in front of the frog. He ignored it. Presently, I had a nice screened terrarium filled with buzzing flying mosquitoes, in my living room. The frog might not have been hungry, but the mosquitoes certainly seemed to be. I really hoped the frog was appreciating all this, but after a few hours the mosquitoes seemed to have all died, stuck to the moist glass inside, and I hadn't seen the frog eat any of them. 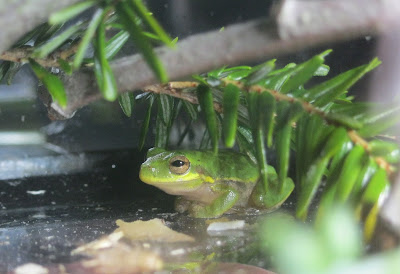 Two weeks later:
Bruno the castaway tree frog is doing well, eating two little crickets a day. I've set his terrarium up with a nice pool, a bed of live moss, a branched frond of spruce to climb, and an electric warming rock from the pet store. This same pet store provides little crickets that are conveniently bite-size for the frog. When I dump in a couple of crickets, the fierce predator looses no time in pouncing on his prey, with a lunge that is almost too swift for the eye to follow. I got the crickets the day following my discovery of the frog, but he didn't eat until two days after that. However, he is now settled in and doing fine. He dug himself a cozy hutch among the damp moss, and I see his golden eyes peering out.
When I first set up the cage with the pool, I never saw him go near the water. He's a tree frog, but frogs like water. I thought that maybe he didn't know the pool was there, and I mentioned to my son Jake that maybe I should put the frog into the pool, so that he would know it was there.
Jake replied, "Papa, suppose you were staying in a really nice hotel with a pool. How would you like it if the housekeeper came and grabbed you and threw you into the pool, in case you didn't know it was there?" Good point. Anyway, a few days later, I happened to come by just as the frog was climbing out of the water, looking content, so evidently he discovered the accommodations and found them satisfactory.
But the sad thing about Bruno the Leetle Google-Eyed Tree Frog, is that he will never get married and have a family, unless Bruno is a she, in which case, she never will. Because there's only one of him/her. But considering where he might have landed, he's one lucky frog to have landed in my kitchen.
---------------------------------

You can watch a short video of Bruno catching a cricket:
http://www.youtube.com/watch?v=f5MBwn14zR4

Thank you for your feedback--